Preface
First of all, I'm an idiot. I woke up two weeks ago and agreed to partner in a used car dealership. Now this wasn't exactly a horrid idea, everything was already there, but some management changes were in order. The place was started by my Greek friend who we'll call Russ for now. Russ is a Greek wannabe playboy that shares a terrible haircut with Dario Franchitti. Russ is a great guy, but lazy and refuses to come to work before 4 pm. Obviously, that wasn't great for business and he found himself in tremendous debt. Through a series of events not worth explaining here, my guy, we'll call him Trey, partnered in. Trey couldn't put all the money up himself so him and a couple other gentlemen not worth mentioning right now paid up. One of those gentlemen is me.

We sell cars. Mostly drug dealer fodder like our 2007 S550 4-Matic. Why Trey was so proud to get that piece of shit on our floorplan I'll never know. It came off the truck with four bald ass tires, a radio that works intermittently, 99k miles, and new paint that looks like it was applied in a barn in upstate New York. We have a word around here for bad cars: bunk. I don't think there is a better word for this S550. Despite this, everyday at least one dude pulls up in some sort of LX platform car with cheap rims and asks how much we need down like we have a Buy-Here-Pay-Here sign above the front door.
"What y'all want like fo' racks down on that joint?"
"It depends on what the bank wants and your credit..."
"My girl got good credit and she make like 3 stacks a month."
"So you aren't buying it?"
"Nah see imma pay for it but I ain't got no credit, plus I don't get no pay check man."
But, one Sunday as we were packing up to go home I notice a mid-2000's E500 pull in. Out pops a short black man around 60 years old. I come and greet him and ask would he like to see the S-Class closer, he says he doesn't have the time but he'll return tomorrow. I grab his phone number, and he leaves. Usually in this business when you let someone leave they never come back.
I came back fresh Monday, before I could get a good chance to sit down and make a phone call, the old man hops out of an mid-2000’s Dodge Ram with the name of his “cleaning business” on the side of it. I didn’t even get a chance to look up and he was in the showroom drooling on the 2008 CL550 we had in the showroom next to our 997 Turbo. I quickly approached him with a kind face.
“I was just preparing to call you, how are are you man?”
“I’m good man, you ain’t tell me you had this in here!”
“What, the CL? Yeah its been in here cause we already sold it to someone.”
“Shit, I want this one. What y’all want for it?”
“I think we’re at 40 on it.”
“Lemme get this one, I got cash.”
I immediately ran to Russ and explained the situation. Here is a good opportunity for me to tell you how we allowed a 2008 CL550 sit in our shrowroom for over three months. Russ had a friend of his come through that was interested in buying the CL but refused to finance it. So he put a $10k down payment in cash on it and set up a payment plan with Russ for four payments of $7k monthly on the same date each month. Long story short, he was supposed to be making his final payment on June 27th and had already missed all his payments.
Without thinking, Russ told this new customer he’d allow him to buy it even though it had been on hold for somebody else that has $10k invested in it. So we sit down with the guy and he says he will buy cash, only if we don’t report it to the IRS. Russ immediately thinks the guy is a cop and has a prison flashback instantly and asks him if he’s wearing a wire. Since we wouldn’t play ball his way, he went to his truck and brought back some motivation. He sat back down in the office and opened a Gucci messenger bag with at least $150k in C notes, and placed two large stacks on the table.
“Thats forty thousand, now will y’all stop playing.”
Russ, scared out of his mind, retorts.
“Not unless we sign that slip for the IRS man”
“I ain’t about to do that man, I’m trying to keep them out of this.”
Then I jumped in with my less criminal two cents.
“Why don’t you put less than $10k down, then finance the rest? You’ll pay it off early anyway. Better yet, you have any cars you can trade?”
“Yeah, I got a Mercedes.”
“What that E500 you had the other day?”
“No, I got another Mercedes it's like a 01' or 02' It's just been sitting."
"Good, we'll take like 9500 and give you something for that and financing won't be a problem. Come back tomorrow with the trade and we'll start getting you set up."
The next morning he came in (with another bag of cash) and started the finance paperwork. We got everything into the computer and the deal was done. He pulls out $10k in $20 bills, whips some cash off the top and says "thats $9500." He told me his trade-in would be delivered later that day. I didn't believe him at first, but sure enough at 3:00 a guy walks in the showroom and hands me a Mercedes key and quickly leaves in another car. I walk outside and there sat a 2002 CL500 on 22" wheels. 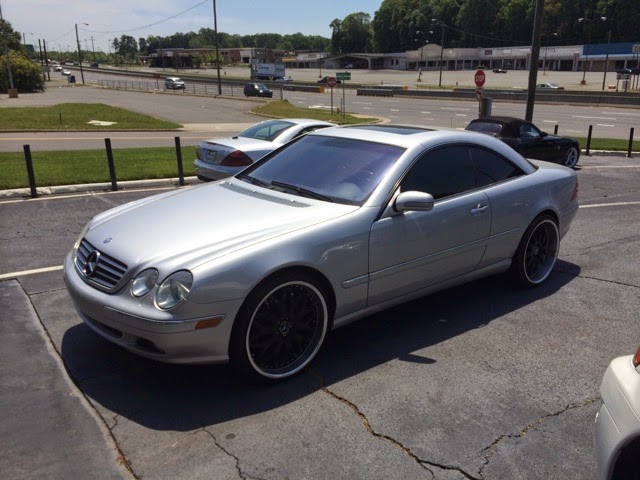 My first reaction was laughter. My next reaction was me questioning the existence of the vehicle and myself as a sentient being. Then I got in the car. Nav, an upgraded Bose stereo, and all the electrics work. Then the kicker: it has 218k miles. TWO-ONE-EIGHT THOUSAND. Then I drove it around the block. For some reason it charmed me. It was the single stupidest vehicle ever and I loved it.
So we call our loving bank, Westlake Financial, and talk to our guy. He asked us about the down payment, like we didn't text him a picture of $9500 in $20 bills.
"We need proof of down payment."
"Well can't we send you a deposit receipt from the bank?"
"No that won't work."
"He doesn't have checks?"
"No the fucking guy walked in here with $150k I think not."
"How about you write a check from you guy's account for the down payment and send that with the deal?"
"So you want us to put his dirty ass money in the bank, and write a check out for the same amount? Do you not realise what you just asked us to do?"
For some reason the dumbass never caught the fact that he just asked us to launder money to complete a deal for a guy who just ended a 18 year stint in federal prison in 2010.
But that's not even the good part. A couple days later he pulls on the lot in an orange 2013 Corvette Grand Sport and signs his registration paperwork in the office with Trey. They have a heartfelt conversation about spending years in prison (Trey had three years in prison) and how different life got outside. As they wrap up he tells Trey he bought another S550 in cash off the street nearby. He walked out the office and thanked us for the deal.
"My girl gonna come by and pick up the car later."
"Good shit man, thanks for everything."
I haven't seen him since. But what started as a bad Sunday turned into a $40k deal about a week later, and a one car off our damn floorplan. I call that a win. 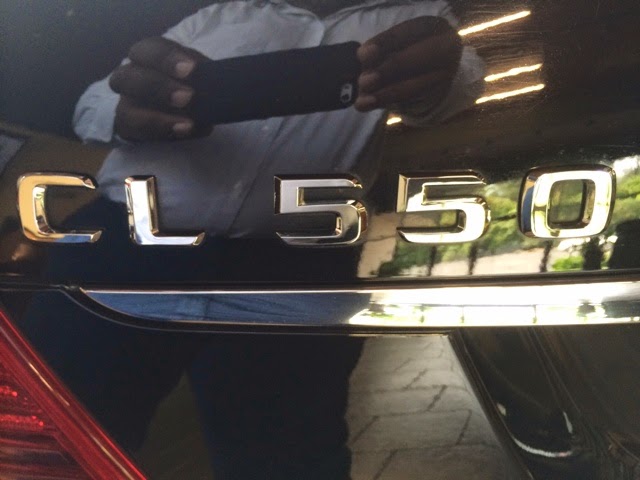