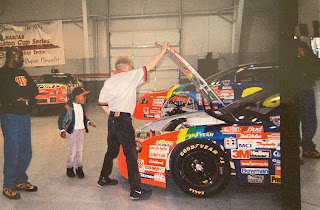 “There sure were a lot more niggers there than I expected.”

My dad looked across the patio table in disbelief. I’m not going to use either of the men’s names that were sitting there enjoying their Budweiser across from him, because that won’t take back what was said. However it was an interesting end to a day that’s been fuzzy to me for years because I tried to forget it happened.

The guy that let the hard -er out of his mouth was the husband of one of my mother’s coworkers. They had both been to our home plenty of times for cookouts, dinners, and everything else in between. They seemed to be great people, I only say that because it took a lot for my father not to mind any guest intruding upon his consciousness at home. But also they were trustworthy enough for my parents to let the husband take me to that year’s (2000) Coca-Cola 600.

I was ridiculously excited for this, I remembered the excitement around Dale Earnhardt Jr taking the pole in qualifying. But I was most excited to see my NASCAR idol Jeff Gordon running his rainbow Monte Carlo in person. NASCAR was my earliest racing obsession, it was natural with me growing up in its spiritual home. Hell, the year before a family friend managed to get me a tour of the Hendrick Motorsports facility. My mother still holds on to the pictures from that day of me sitting inside a fresh #24 car. It was a dream almost.

The family friend and one of his buddies picked me up that afternoon to head up to the track. The gravel parking lots surrounding Lowe’s Motor Speedway were mostly friendly looking, chock full of people who had been pregaming most of the afternoon. The bridge collapse had just happened just the week before and I remember the state troopers guiding us across US 29 to the track.

Once I got inside things weren’t as friendly anymore. I definitely was in the only mixed-race group there, and at the time I don’t think I was capable of understanding that two white guys walking around with a black child was abnormal to the people swirling around us. I did see other black people, mostly young men, making up small specks in the crowd. Every time I saw another brown face the tension eased a bit and by the time we made it to the stands I felt comfortable enough to just enjoy the race.

And I had good memories from the race, the rush of the cars running in a pack single digit feet away from me as I stood near the wall. It was a loud, colorful, moving experience that I couldn’t have anywhere else. I was a thirty minute drive away from the house, but the action felt like home. At least I did feel that way, the warm late-May sun turned the stands into a hot pool full of people. Then the first chicken bone got thrown at me, and the pool full of just faces quickly made itself a pool full of people I didn’t belong in.

See, the best thing about living in the Charlotte area in the 90’s and 2000’s was Bojangles’ chicken being everywhere including being a vendor at every local sports venue. What this meant is near sunset that Memorial Day weekend the drunken motorsports fans were enjoying the Cajun-seasoned goodness. The beer gave them the mental wherewithal to throw the bones of their recently-enjoyed chicken at me, a child, for whatever reason. Whoever it was behind me in the stands had eaten quite a few pieces. I remember two hitting me in the back in rapid succession. Another hit me directly in the back of my head. I remember turning around confused, and couldn’t figure out which mouth nigger came out of. More bones came later, more of them started to miss as time went on, a span of minutes.

I don’t remember shit after that. Honestly, I didn’t completely understand or know what I experienced that very day. But I reflected on the moments over and over for years, and as I got older the vivid flashes of my memory painted an uglier story than I wish to remember. For years I replayed the memory and shook it off, filing it away like so many things in the past. I never really ever came to terms with my feelings about it all, generally staying away from motorsports until I was nearly an adult. I felt like my passion in life was something that I didn’t deserve to belong to, I felt like an outsider to something that burned deep in my heart my whole life.

But why am I telling any of you this? I’m not really sure. I’m not somebody that makes statements. But I’ve retold so many of my personal experiences that involve me, but not many of them that are a part of me. This story not only shaped who I became but is probably one of the few times in my life I resented the passion I feel for the automobile. It was an experience that I hated, but it happened, and I know countless other people like myself have had similar experiences. I just don’t want them to ever feel alone or powerless because of it.